Well done to our Ladies Senior 4s, Lesley, Alice, Hazel and Margaret who won their semi- final against Guisborough Priory having lost the first 4 ends to be 6-0 down, won the next 2 ends to be all square and then lost the next 4 to trail by 5. A strong finish gave the team a 14 -11 lead going into the last end where they dropped a single shot.

Congratulations to Reece along with Ashley, who yesterday reached the  semi-finals of the Junior Pairs where they lost to the eventual runners-up Northamptonshire. 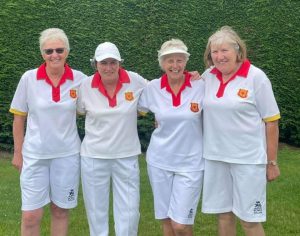